Besides receiving tips about how to motivate others, they got a nudge to use technology more in their classrooms.

The conversation at a staff development day on Aug. 30 was arranged by Christopher McGee, the Webster Groves School District's curriculum coordinator of science and social studies from kindergarten through eighth grade. McGee, 35, developed the relationship with Pink through Skype.

McGee, who started in the curriculum coordinator job at the start of the 2012-13 school year, serves largely as a coach to teachers. He has used technology heavily in the classroom ever since he started teaching chemistry and physical science at Oakville High School in 2001-2004. It's a major reason he received two awards for teaching in 2013.

McGee was one of two people in the St. Louis area and 2,200 in the world to win the Apple Distinguished Educator Award. To win, he had to write an essay and produce a video about how he uses technology for student learning.

"It was really a career recognition," McGee said. He told how he recorded his instruction early in his career and posted it on YouTube for his students to watch. "My students could look at it at their own pace," he said.

McGee also took after Google, which allows its employes to spend 20 percent of their time doing projects of their own design.

The second honor, which McGee received in August, is the 2013-2014 Phi Delta Kappa Emerging Leaders Award. He is one of 24 educators who received the award from the international education organization.

To enter, he submitted two essays and three letters of reference. The contest was judged by a team of past winners and members of the organization itself.

"He's really been a mentor to me, and I know a mentor to others as well. He really does his work with students in mind," Dempsey said.

"He just possesses a tremendous commitment to learning and education," said Simpson, who has long known McGee.

In the job, McGee serves as a coach to help teachers improve their skills.

McGee started on the path toward being an educator when he grew up in Collinsville, Ill. He credits his fourth grade teacher and his chemistry teacher at Collinsville High School with giving him the desire to teach. His interest in the Internet and the Commodore 64 computer in their early days grew as he went into teaching.

After teaching at Oakville High School, he taught sixth grade science at Nipher Middle School in the Kirkwood School District from 2004-2012. In the past, he's also coached football and track in the Oakville, Lindbergh and Kirkwood school districts.

Outside of school, McGee and his wife, Patricia, live in Crestwood, where their newborn daughter, Isabela, is keeping them up late.

He also is busy preparing for the edcampSTL, a one-day conference set for Feb. 8, 2014 at Affton High School, where people interested in education can share their ideas. McGee started the conference in 2012 with Robert Dillon, director of technology in the Affton School District. Dillon was the third person to submit a letter of recommendation for McGee for the Pi Delta Kappa Emerging Leaders Award.

For all the great things technology does, McGee acknowledges there are limits.

"Computers are only one of the pieces. They never will replace good teachers," he said. 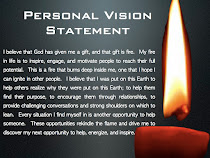